The generation of electricity from falling water is generally divided into three broad categories:

It is important to note that micro-hydro involves a large range of system sizes, from a 50 watt system powering an electric fence to a 100 kW system selling significant quantities of electricity to a utility. Like other renewable energy technologies, micro-hydro can be used as either a grid-connected or a battery-based, off-grid system. This module focuses on micro-hydro systems that are designed to offset home or farm/ranch energy consumption, not the sale of electricity for profit. If you have an interest in larger systems designed to sell electricity for enhanced revenue, please contact your Montana or Wyoming Cooperative Extension Service.

Micro-hydropower resources are also divided into two categories: low-head and high-head systems. Head is a measure of the vertical distance that water falls. Low-head is generally considered anything between 3-40 feet. Obviously, the higher the head, the greater the available energy, so low-head systems generally require more available water (flow) than high-head systems to generate the same amount of energy. The difference will be further discussed in Section 2: Site Assessment.

Components of a Micro-hydro System 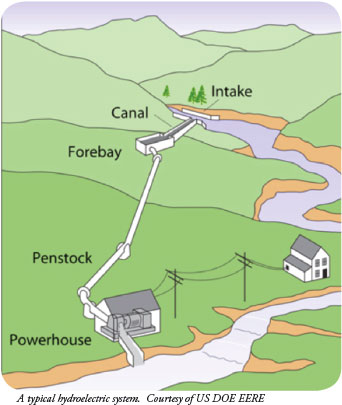 All hydroelectric systems are designed to extract energy from falling water, regardless of the size of the installation. The figure on the left shows the basic components of a system. The intake is typically shielded with a trash rack, weir, or forebay to prevent debris from entering the pipeline. The pipeline (penstock) carries water under pressure to the turbine (powerhouse), where the energy of the flowing water is converted to electricity. The turbine for a micro-hydro system operates in much the same manner as a wind generator. The “wild” AC power is sent to an inverter, from which standard 110/220 volt, 60 hertz electricity emerges that would commonly be used in homes or other electrical loads.

In essence, a micro hydro systems works just like a wind turbine, except it extracts energy from a denser fluid (water) than a wind turbine (air)!

Only a lucky few farmers, ranchers, or homeowners will have access to a quality, micro-hydro resource. Hydroelectric resources are much more site specific and concentrated than solar or even wind energy. Naturally flowing streams, irrigation ditches, and existing pipelines are the most likely locations for a micro-hydro system. Obviously, if you do not have flowing water on your property, then micro-hydro is not for you. For those who have access to the resource flowing water, micro-hydropower can often be the lowest cost source of renewable energy available, so it should not be overlooked. More information on site assessment, selecting equipment, regulatory considerations, cost, and incentives is presented in the following sections.